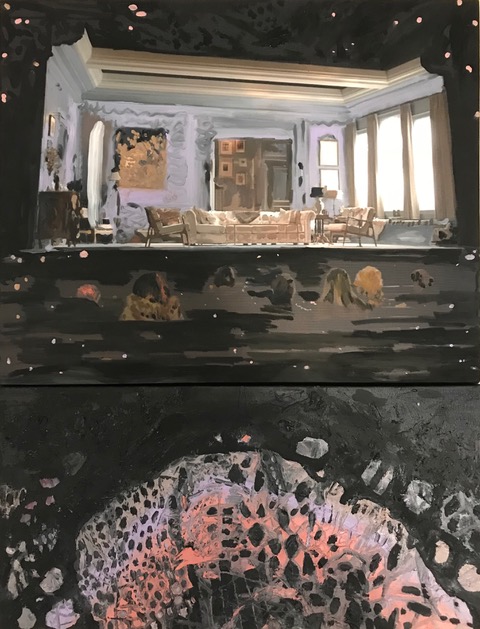 What does it mean for something to resemble something else? To correspond in appearance or superficial qualities, if we are to follow standard definitions of the verb. Resemblances engage our ability to perceive similarities. That child’s timid smile resembles her father’s. Certain painting truly resembles some corner of the Catskills we drove through some time ago. It goes without saying that as a discipline of creative expression painting engages our sight as viewers. For those familiar with Karen Dana’s practice over the past few years, her most recent works may here and there conjure images that we may have seen before—a disquieting dinner scene, a couple in awkward embrace, some vaguely figurative distribution of crimson and mahogany pigments on a stretch of canvas. Certain images seem to reappear—some painted anew; others, reprinted digitally—but one would be hard-pressed to single them out or trace them back to earlier iterations. Which is precisely the point, I think, because Dana’s work has long been invested in exploring the instability of memory as a sense-making mechanism. If some images seem to resemble other images, our hazy awareness of their correspondence in turn resembles the artist’s survey of her own memories—in particular, the narrative conflation of time and space and the occasional difficulty in drawing a clear distinction between remembered and imagined events.

Although not readily apparent at first glance, women stand at the core of Dana’s unsettling pictorial narratives. Careful observation of her canvases reveals their protagonism. These may or may not be the women in Dana’s life—the artist herself, her mother and grandmothers, her aunts, and so on. Womanhood and kinship are central preoccupations of her practice as a painter. Many of her works examine the past and its bearing on her present circumstances as a mother, wife, daughter, sister, niece, friend, and artist. An immigrant herself, living far from where she was born and raised, Dana is particularly concerned with the parallels between her experiences and those of her ancestors, particularly her grandmothers, both of whom emigrated from the Levant to Mexico under great hardship in the middle decades of the twentieth century. Some works are single canvases. Others consist of assemblages that question the ability of any single image to sufficiently represent, seeking instead to reconstruct the emotional complexity of reminisced states of mind. Interlacing events and impressions into dense fields of spectral imagery, Dana’s works evoke the confounding experience of being immersed in overlapping networks of interpersonal relations in which one performs different roles, sometimes simultaneously.

But in Dana’s practice, resemblance exceeds the visual, functioning as more than a strategy of figurative representation. Indeed, through her hands, the craft of painting also doubles as performance of feminine labor as a fundamental feature of her reminisced personal history. Consider, for example, the intricate manner in which strings of white pigment are overlaid on the surface of one of the four printed canvases that form A State of Being(2018). Rather than just the illusionistic representation of the look and texture of knitted fabric, this detail results from Dana’s painterly reenactment of the craft of knitting, using her hands to apply pigment on the surface of the canvas much in the way in which she remembers her grandmother employing hers to create a large blanket out of yarn. Here, the artist has used her hands to weave pigment on canvas. Elsewhere, she has kneaded it or applied it in some other performative fashion in memory of her forbearers. In Dana’s work, images may sometimes resemble one another and fuzzily project the past onto the present. But it is through her embrace of painting as manual labor that the artist most poignantly acknowledges her kinship with a lineage of women that have used their hands to perform their multiple social roles. Reenacting their labor through the means of her own practice allows Dana to preserve her ties to them across seemingly insurmountable boundaries of time and space.