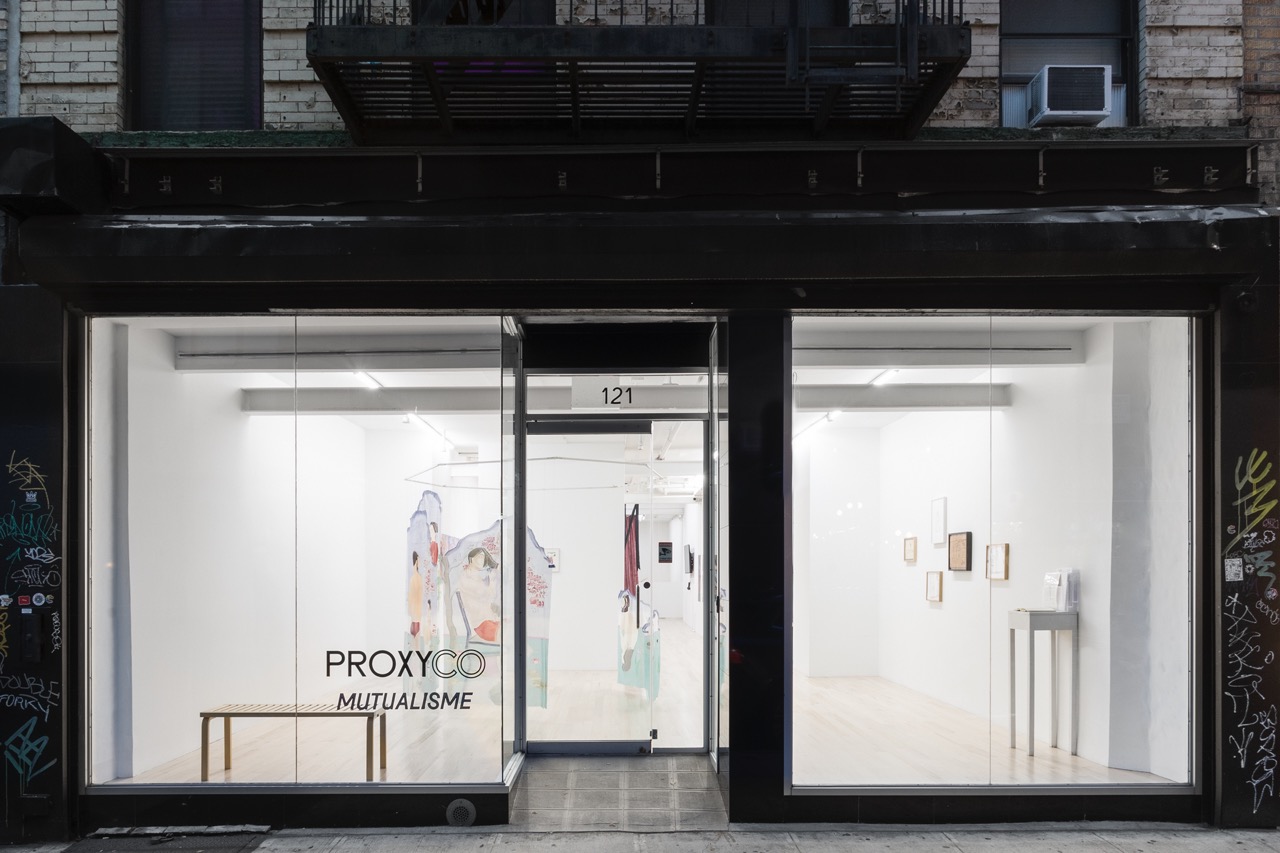 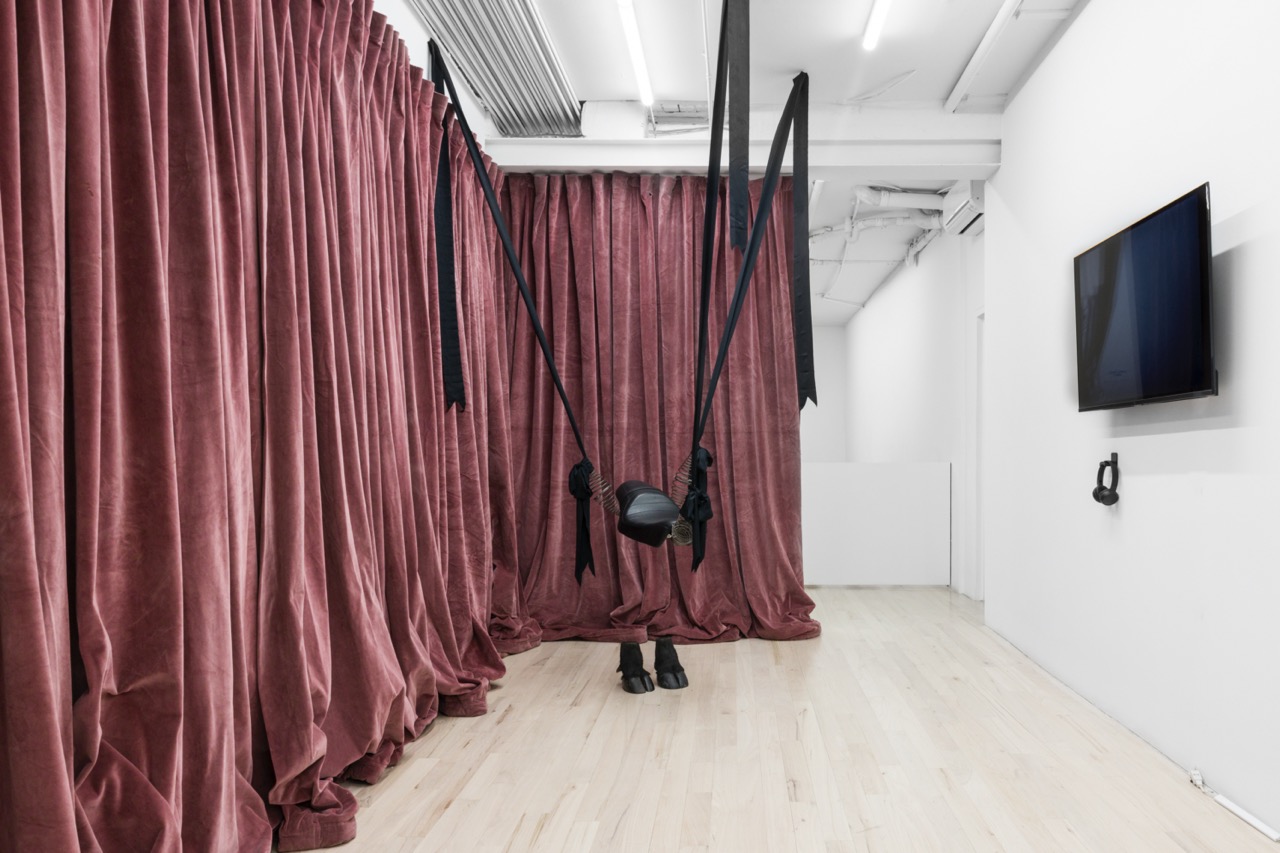 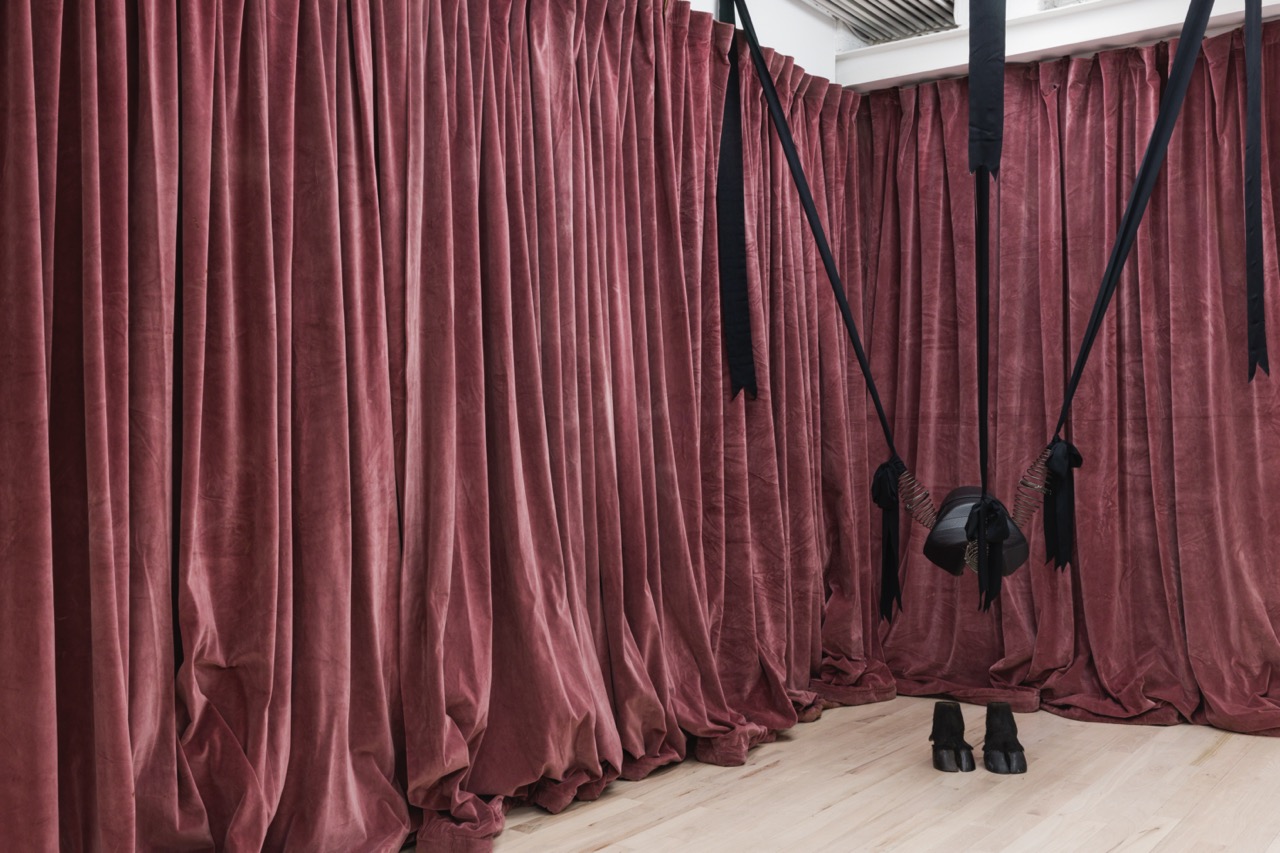 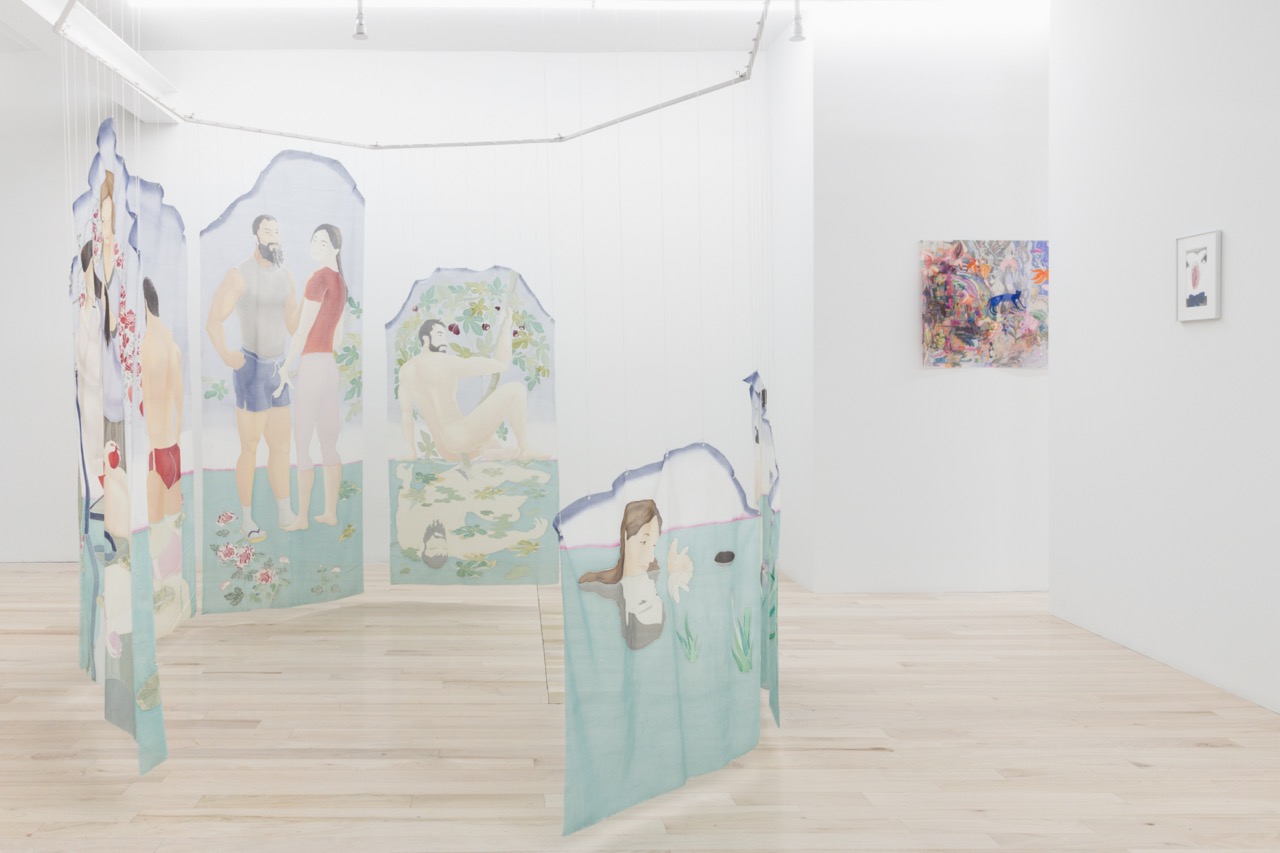 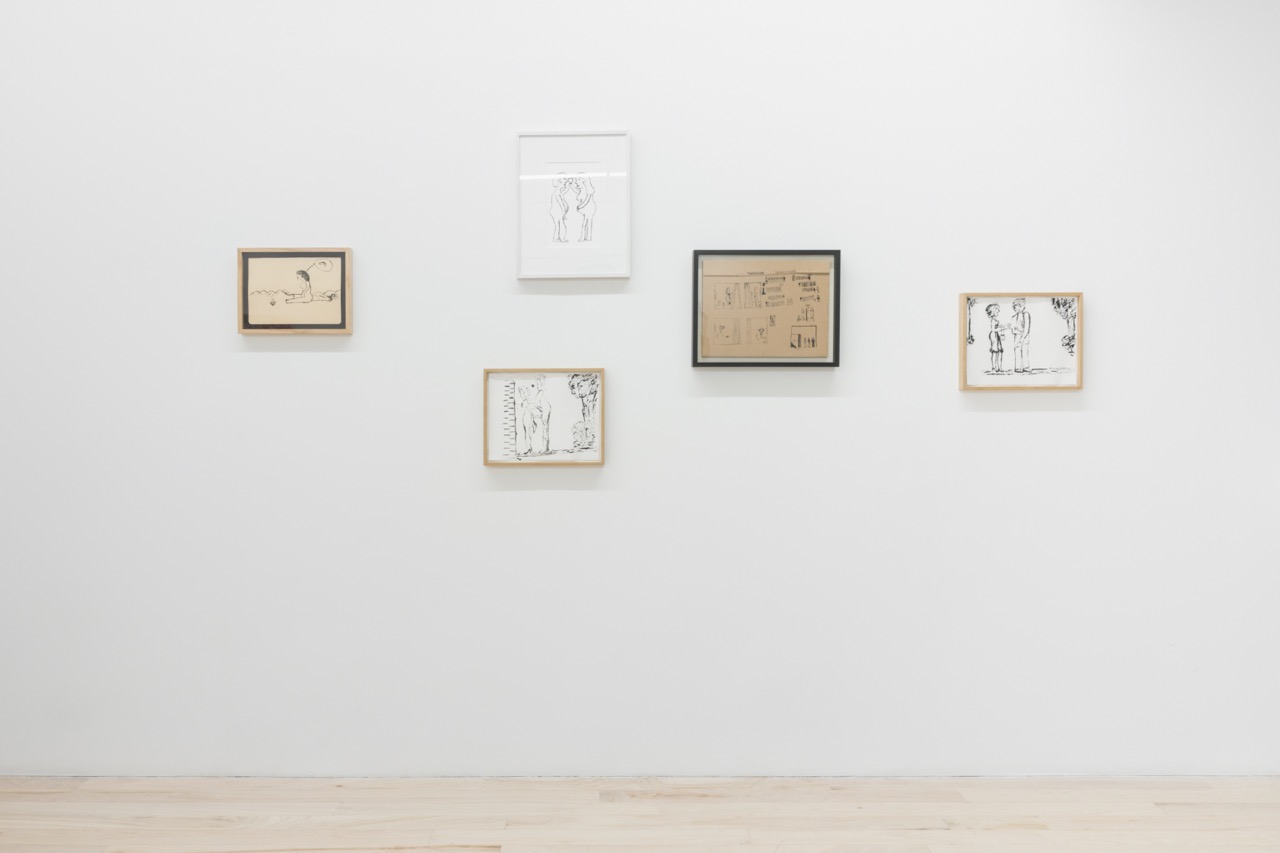 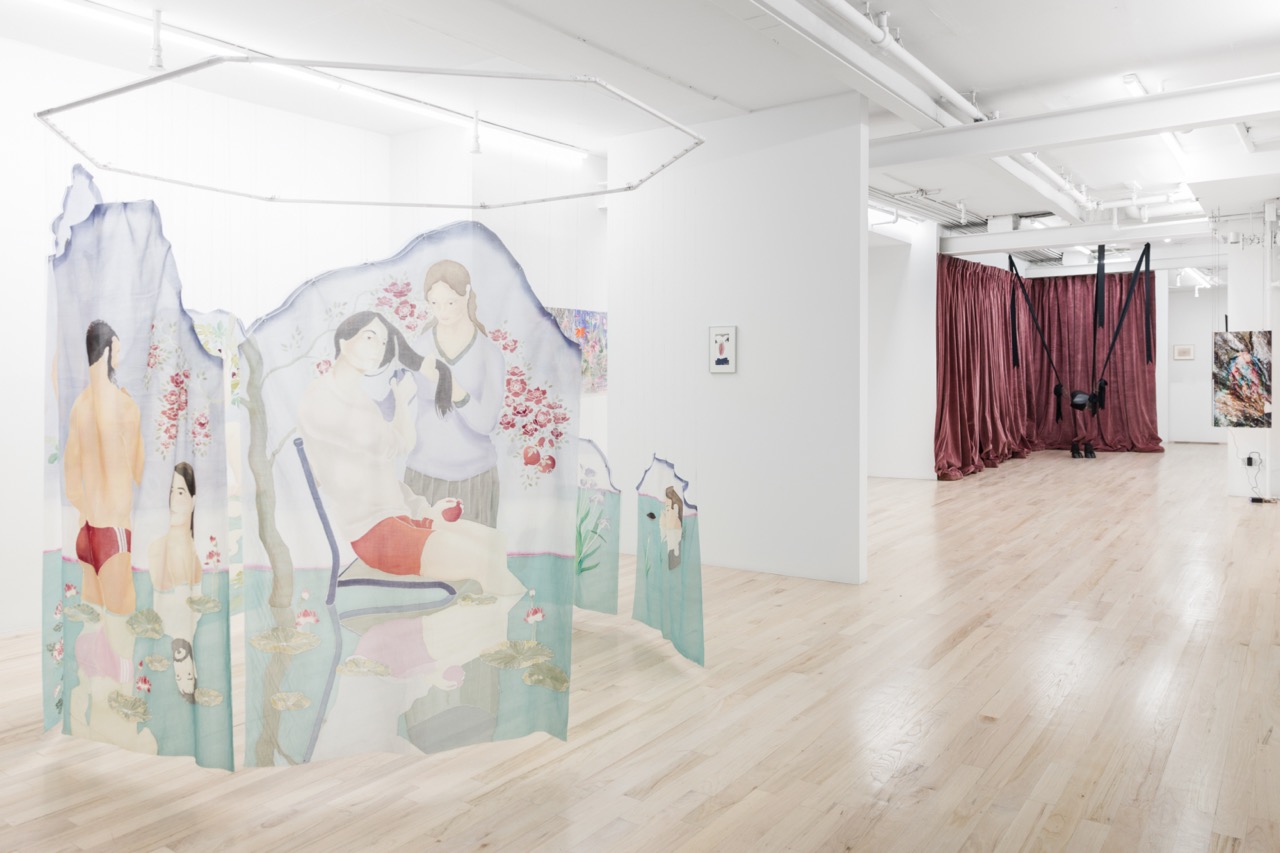 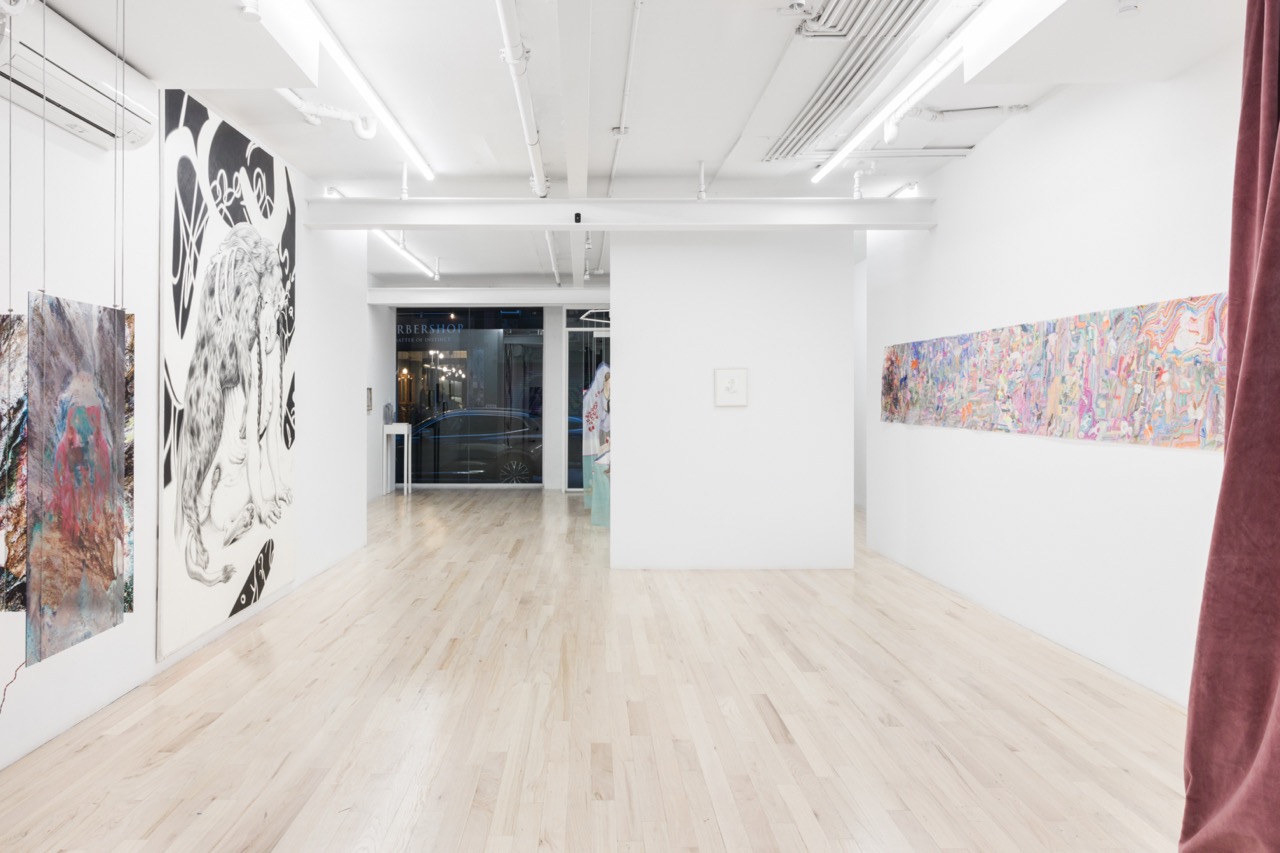 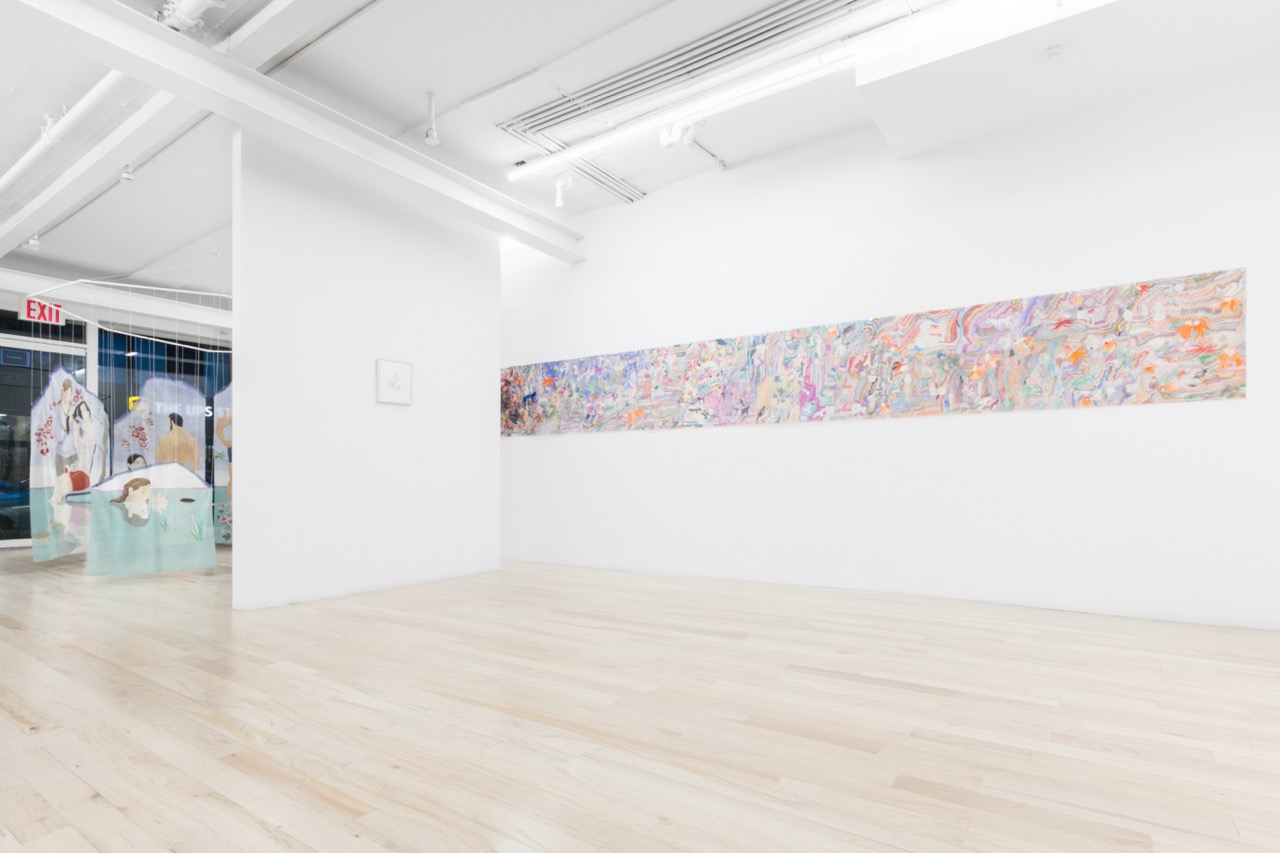 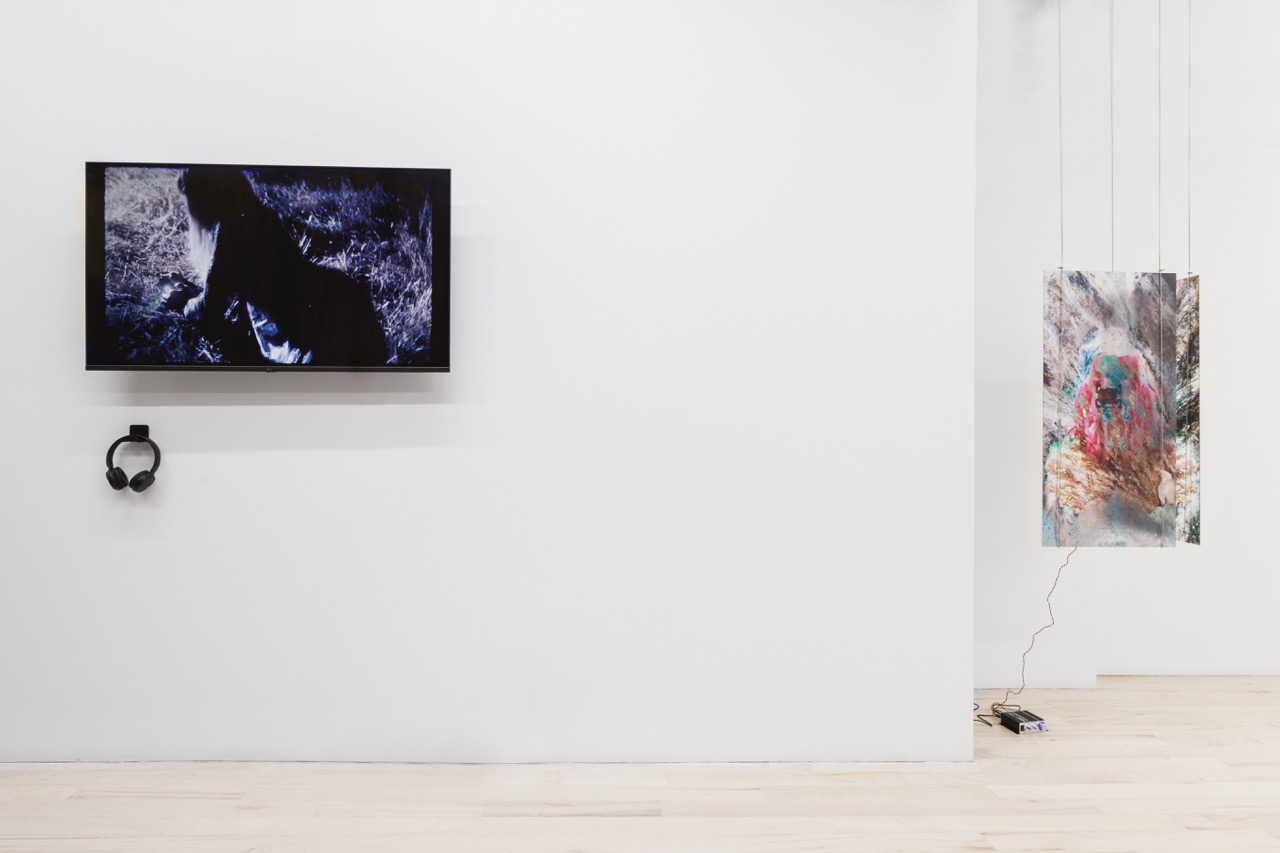 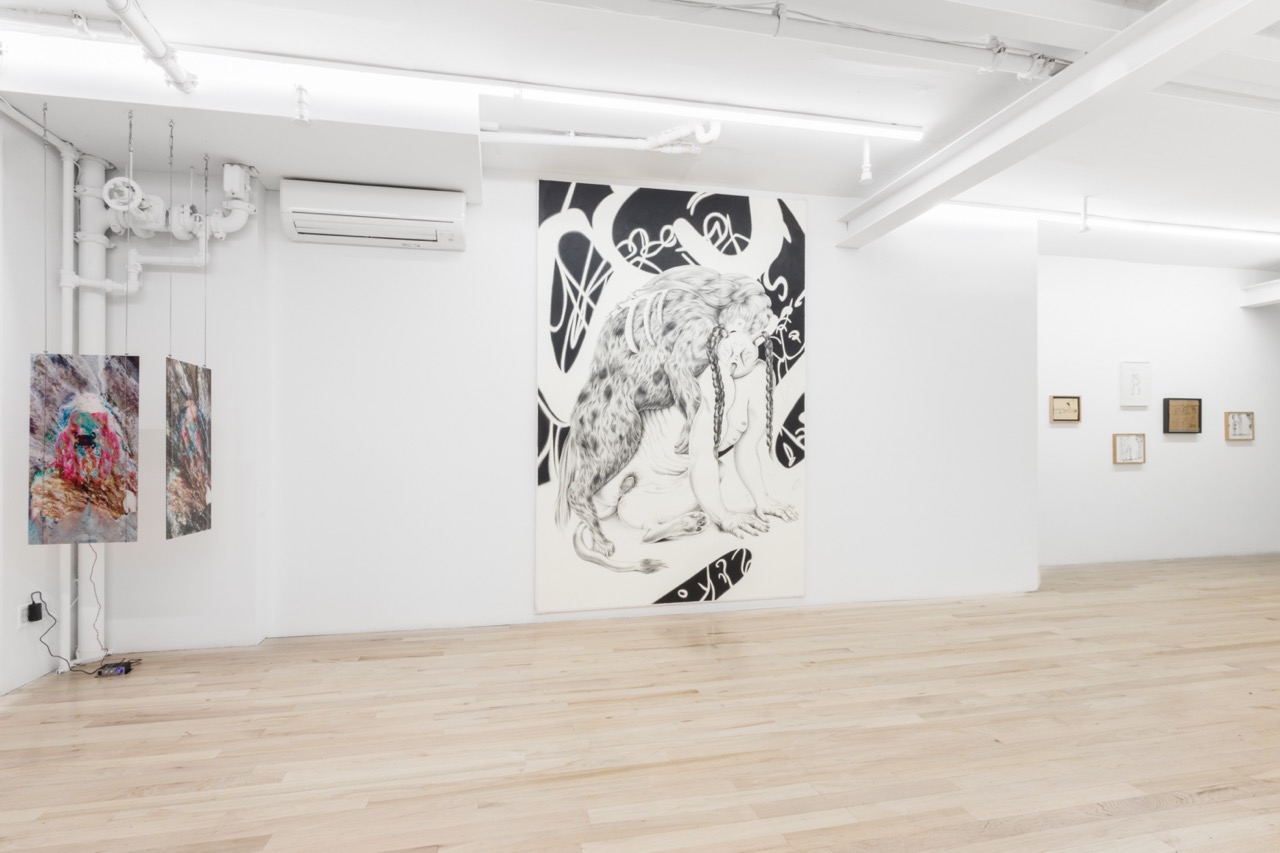 mutualisme is a term with two meanings, biological and economic, both of which are used in this exhibition to explore forms of cooperation and strategies of adaptation across gender, ecological, and social issues. It implies that things are less defined and challenges the expectations of purity that come with questions of identity and nature, to open them up to a more human and interspecies solidarity. How can we shift relationships of control and power to seek forms of joyful camaraderie?

Biologically, mutualism means an interaction between different species, which brings them each advantage, in terms of evolution. Queer ecology combines queer theory and ecological criticism to ask how our perception of what is “natural” impacts our relationships with the environment and each other. Timothy Morton writes in “Queer Ecology, 2010” that an effective response to global warming requires recognizing that there is no human-nonhuman boundary and the interdependence of species and environments. “Evolution means that life-forms are made of other life-forms. Entities are mutually determining; they exist in relation to each other and derive from each other. Nothing exists independently, and nothing comes from nothing”, he writes. Morton suggests that human-nature interactions as well as gender relationships must be restructured if we want planetary survival and adds that all forms of life constitute a mesh: “a non-totalizable, open-ended concatenation of interrelations that blur and confound boundaries at practically any level including between species, between the living and the nonliving, and between organisms”.

From a socio-economic point of view, mutualism is a model based on mutuality, a collective foresight action by which people group together to insure themselves mutually against risks. Mutuality (le mutualisme) is considered the oldest social movement in France, but its origins go back even further. Traces of fraternal funds have been identified in ancient civilizations, notably among Egyptian stonecutters, and in the Middle Ages where guilds and cooperatives began to structure the professions of skilled and urban crafts. At the end of the 18th century in France, the emerging mutualist movement consisted of a small number of groups with a local reach and resources, but their development was interrupted by the French Revolution. However, the mutualist movement did not weaken; on the contrary, this “clandestine” mutual benefit society managed to pursue its activities and gave origin to sociological changes. (M. DREYFUS, Liberté, égalité, mutualité. Mutualisme et syndicalisme (1852-1967), Paris, Les éditions de l’Atelier / Editions ouvrières, 2001).

By looking at the past we can think about building the future to search for other ways of living well together that open more complex and more serendipitous learnings beyond hegemonic norms. Commoning, from a feminist perspective, gives a particular attention to the everyday practices, social relations and spaces of creativity and social reproduction where people come, share and act together. It can be perceived as a way of understanding the world, enabling us to create existing local solutions whose growth is centered on communities rather than extremely fast profit strategies that lead to a big homogeneity. In Silvia Federici’s book Re-enchanting the World, she describes a definition of the commons as an attempt to establish forms of social cooperation outside the state, prioritizing cooperative forms of care. Federici explains that the “politics of the commons” refers to different practices by social movements that “seek to enhance social cooperation, undermine the markets’ and state’s control over our lives, promote the sharing of wealth, and, in this way, set limits to capital accumulation.”

In Mythomanes, French artist Arthur Gillet interprets the myth of Dionysus and Prosymnos from a trace found in the 4th century A.D. in the Protrepticus by Clement of Alexandria (a myth that has no artistic representation). This work is a series of paintings on cotton, suspended as a mobile by threads that turn on themselves and that can be crossed. It is also an homage to his former lovers, survivors of the AIDS epidemic in the 80s and 90s, whom he met around the 2000s at the cruising area of the Apigné ponds in the middle of the forest, near Rennes. The myth, in which Dionysus honors the promise of sexual favors for an older man who is now deceased, allows the artist to reflect on the power of desire against death and the mourning of impeding models at work in homosexuality or transition.

Drawings by Alexandra Lopez, Andrea, Alexandra Mapuchina, Gilda Star, Giuliana, Angel, Eri, members of Feel Good Cooperative, were exhibited for the first time as part of the annual exhibition of artists in residence at the French Academy in Rome, Villa Medici, 2020 in which artist Pauline Curnier Jardin was a resident. The collective integrated by Colombian sex workers, architects and artists, was born during lockdown with the aim of providing financial assistance to sex workers during those difficult times. Drawings are accompanied by the film “Fireflies (Lucciole)”, from French artist Pauline Curnier Jardin, founding member of the cooperative, which was filmed in the suburbs of Rome that were once full of fireflies. The bodies appear and disappear as intermittent lights, as if they were fireflies at night.

It took Yanieb Fabre around seven to eight months to draw “Codex”. In the drawing we can see an obsessive journey through different dimensions, colors, animal, human and spiritual universes. Yanieb conceives drawing as a form of writing for which she asks, “How do humans become animals?” She creates hypnotic rituals that allow to simulate desire, animality and melancholy.

Philth Haus is an artist collective whose methodology is a material activation of the immaterial and a process of transubstantiation which develops to explore privilege and exploitation in a globalized economy. Recent materials have included hormonally active wastewater, lithium carbonate, machine learning, blood, and music. Through this collective, each member hopes to transcend to a realm in which the planet and body are made one via globalized economies, identity semiotics, and biological contamination.

In Jazmin Lopez’s “El triunfo de Venus o la declaración del amor, 2020” we can see dense curtains from a theatrical scene around the seat of a motorcycle hanging by metallic springs and black ribbons. Underneath there are two bull hooves. This fictional erotic installation is a citation of Ilya Kabakov’s The Man Who Flew Into Space From his Apartment (1984), which tells the story of one of the residents of an apartment who built a catapult-like contraption to shoot himself through the roof into outer space where he would travel on powerful streams of energy. Although Jazmin’s installation also invokes the scene of a Baroque painting, only without the actual representation of the object of desire —the female nude.