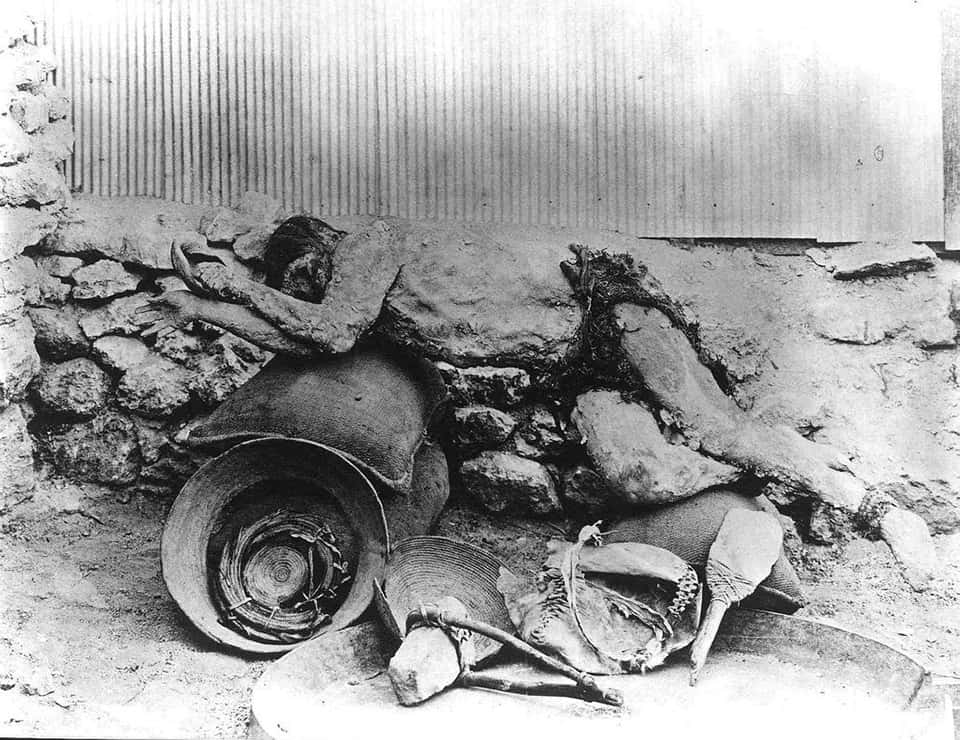 Towards the very end of the 19th century a group of artisan miners working the La Restauradora mine in the Antofagasta region stumbled across a mummified body in a cave, covered in an intense cupriferous color. The amateur archaeologists soon realized that their discovery was related to the same sort of mining activity that they were engaged in. To prove it, lying near the body were a pair of hammers and a basket dating from prehistoric times when mining was extremely rudimentary. Several days later the find had piqued the interest of the kinds of intrepid explorers scouting the area at the time looking to invest in the growing mining industry. Over the years the frenzy grew until the prehistoric miner’s mummified body was hailed as a valuable treasure and was bought by a couple of businessmen.

Torres & Tornero Ltd bought the mummy and exhibited it in the Chilean pavilion of the Pan-American Exposition held in 1901 in Buffalo, New York. The businessmen’s aim in the macabre exhibition of this mummy was purely commercial: to make as much money as possible, driven by common grisly fascination with the dead. Any pretensions to protecting the indigenous heritage of this man from the Atacama desert, or even less so of promoting the cultural context he came from, was far from their intentions. But as the months went by and the mummy remained unsold the two businessmen left it in New York in lieu of payment, and returned to Chile empty-handed and debt-ridden. Ironically, it was this lack of interest in the mummy that hit a nerve with the public. Years later, in 1905, in a confused acquisition, the entrepreneur J.P. Morgan bought the mummy and donated it to the American Museum of Natural History, where in 1912 it was called The Copperman.

The visual artist Nicolás Grum takes this short history as the basis for an installation and audiovisual piece The Copper Man after his Premio de Arte CCU 2019 Award for which the artist was selected for a residency in New York. The artist brings together the dilemmas that surround The Copper Man in a global context highly charged with epistemic conflicts. From an exhaustive investigation into the tours that are laid out in museums, through the issues of conservation of prehistoric mummies, and ending with the stories and cosmovisions that the Atacama communities of Alto El Loa developed, Nicolás Grum has created a piece in which The Copper Man connects the audiovisual images, poetries, landscapes and music of a part of Chile and the US where this imaginary is treasured.