All That Is Solid 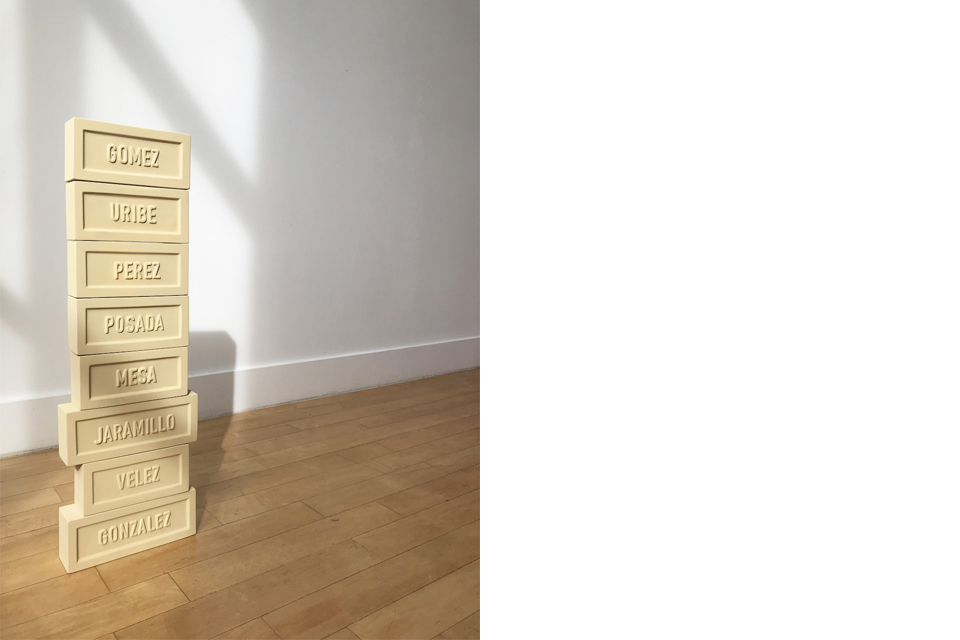 …Our revels now are ended. These our actors,
As I foretold you, were all spirits and
Are melted into air, into thin air…
Prospero, The Tempest

When the artist Carl André’s Equivalent VIII (1969) was acquired by London’s Tate Gallery and installed in their permanent collection galleries in 1975, the minimalist work was ridiculed and dismissed as “a pile of bricks”. In its defense, critics were forced to explain that Minimalism “produces serious art whose aim is to simplify and reduce, to eliminate easy appeals to the eye and to focus the viewers’ attention on the primitive dimension that art possesses when stripped of its visual rhetoric.”1 This kind of discourse and understanding owed much to the pioneering work of Marcel Duchamp, who conceived of his ready-mades as strategies to promote an ‘aesthetics of indifference’— a dismissal of art’s visual importance (its retinal hegemony), and a complete obliteration of the prevailing parameters of good and/or bad taste.

Born in Medellín that same year, the oldest son of a real estate broker and a psychoanalyst, Pablo Gómez Uribe came of age during the aftermath of Colombia’s most violent years, amidst the country’s war on drugs, and the incipient (if still unresolved) peace process. A society wounded by the legacy of civil war and trauma, Colombia’s struggles are partly rooted in the swaying politics of memorialization and erasure2. Through his formation (and deformation) in Architectural studies, PGU developed a commitment to structural solidity that has all but inhibit- ed his fascination with the instability of forms. Bricks—central elements of his artistic vocabulary—are the modular building blocks, the irreducible unit, and the most ambiguous sign of labor: deceptive in the dual connotation of their assembly as both a suggestion of construction (a work in progress), or collapse (a scene of disintegration). Fittingly, one of the first works in the exhibition, Tridimensional Palimpsest, consists of 200 bricks of pumice stone that trace the architectural memory of Proxyco’s former floor plan. Central to the exhibition space, Family’s Manifest—an explicit reference to Carl André’s Manifest Destiny (1986)—on view as a permanent installation at the Judd Foundation, merely a mile away from the gallery—charts the genealogical origin of the artist’s self-nomenclature. Opposite to André, whose work features the slogan of 19th century American imperialism, Family’s Manifest presents viewers with the constitutive vertebrae of a single individual, the constructive condition of an everyday man, the ordinary hero.

The artist’s most recent proclamation, MEDENYAL is a conjunction of his dual city-zenship (Medellín and New York), and the inherent self-obliterating nature of their architectures. As a Homo Faber specializing in demolitions, PGU questions the limits of the object’s constructability: bricks are sent out for testing, and their failure reclaimed as art. This celebration of accident brings to mind Duchamp’s Great Glass (The Bride Stripped Bare by Her Bachelors, Even), “finally unfinished” in 1923, which notoriously broke in transit when being returned from loan at the Brooklyn Museum3. By welcoming the results of procedural testings into his work, PGU targets the notion of Architecture as an arena of uncontested progress, problematizing the conflicting relationship between modernism and modernization. His series of Mod-jects (Rocking, Shaking, Orbiting) resemble machines used by scientists in laboratory testing, a symbolic product of which can be found across the gallery space, in the five Tested Bricks that resulted from a pro- cess of industrial testing. The cracks that have crystallized on the surface of these wooden samples (cracks that carry the memory of trauma, prototypes baring the sign of malfunction) are perhaps the artist’s most cherished bit of information. Inverting the logic of aesthetics and the visually appealing, these tested samples set the intention for the artist’s entire body of work: they remind us that bricks— in spite of their impeccable regularity— are not to be defined by their beauty, or the way they appear to our eyes, but by the possibilities they contain (revealed finally upon testing). In order to question the narratives of beautification, PGU produces a space of fiction (the Tested City) where metaphor can flourish, generating the possibilities for an invented identity to emerge.

In the ambiguity of global capitalism, where seeming permanence is designed for obsolescence, triumphant architectural developments that follow the beat of real estate drums are destined for decay, disintegration and disappearance. As Marshall Berman best explained it (when he quoted Marx quoting Shakespeare), “to be modern is to find ourselves in an environment that promises us adventure, power, joy, growth, transformation of ourselves and the world—and, at the same time, that threatens to destroy everything we have, everything we know, everything we are.”4 It is precisely the idea of progress that PGU’s practice attempts to destabilize, even if his critique of construction and the ever-developing real estate market leaves behind nothing but “a pile of bricks,” a bunch of melting solids in a state of perpetual disintegration.